This morning I had 3 separate DCs and 3 separate VCSA instances. Right now I have 4 “servers” ready for action with another 4 NUCs on deck.

With ESXi, my current approach has been to make a bootable USB from an ISO. So that’s what I’ve done with the first 4. I think this part is pretty trivial, but I have done it at least a 100 times. For the next 4, I’m going to try go back to PXE boot. Time will definitely be the deciding factor.

‘The internet is broken!’

One of my favorite features of the homelab is that I have two network connections, setup for failover. I have fiber connection from one provider on one side of the house. On the opposite side, I have a 70mbit connection from another provider. Additionally, I can still load balance inbound traffic across the two providers. I’m using a Netgate SG-1100 for that.

Behind the Netgate, I have a Cisco Catalyst 2960-X. This one serves network to the rooms of the house and the homelab. The PiHole running on a Raspberry Pi 3B+ is also part of this tier.

Next in this line is a Netgear FS728TLP which handles the big rack and the shared storage. 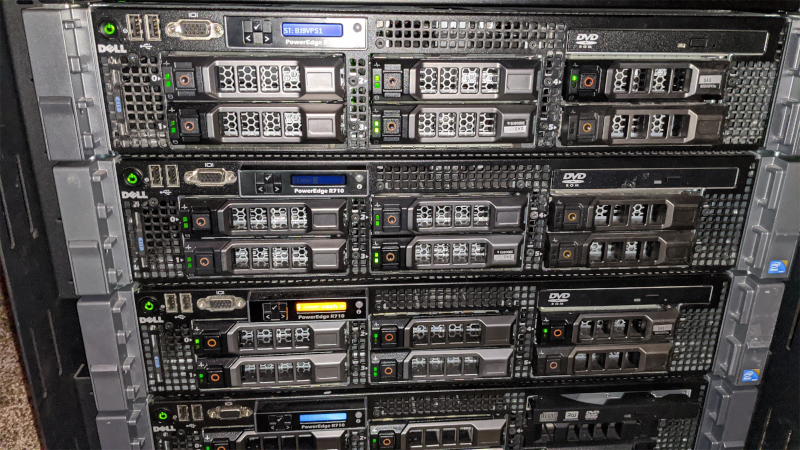 Behind the Netgear are four Dell R710s and a QNAP TS-321P. The R710s are a unique blend of hand-me-downs from an really good friend with a kind soul (and no more room for a rack). The rack runs 1000W at idle. Three of the R710s can run ESXI 6.7u3, the other is too old, but can still run ESXI 6.5. They do their fair share of keeping the basement warm in the winter.

At this point, they each have ESXI installed on the USB key. I’ve also gone in an cleared out most of the orphaned disk partitions. There is still one partition that I can’t figure out how to delete. I have not yet reverted to booting from a USB running Linux. I’m being stubborn and trying to use the tools provided by ESXI.

The QNAP is very affordable. It’s got 2 bays with WD Red 2TB drives. It has dual 1GB NICs also. I’ve done a factory reset, upgraded the firmware, and set it up to capture syslog. I gave the syslog share 5GB of disk.

At this point, its just the Netgate shipping syslogs.

One of the R710s will be the management node. It will run VCSA and a jumpbox to start. The other 3 will be a DC and each host will be configured ‘like’ an AZ via resource pools.

I will use terraform and various CLI to create:

I was there when Madhav Sathe coined the phrase:

So I need to hurry up and get some of that. Eric literally ruined the rest of the week and my weekend with that demo. But in a good way.

I’ll be providing access to my friends. I will also be treating the homelab like its production so that I can learn. Repaving is great, but I have never been on the clock. Opening it up to others will be one part of the process. I will also try to make the metrics relevant and public.